“A banal affair!”, “Amateurish!”, “A vulgar parody!”, “Out of place!” were just a few exclamations many art critics and observers used to describe Duchamp’s final work of art, Étant donnés (Given). The piece was a great disappointment for most of the Duchampians, due to the fact that it conflicted many aspects of his earlier works. Yet, as Calvin Tomkins remarks in Duchamp’s biography, self-contradiction has always been a part of Duchamp’s working process.

Duchamp claimed that Gustave Courbet, who is known for his groundbreaking painting The Origin of the World (1866), turned art into a solely visual surface that only addressed to the retina of the eye. He argued that before Courbet’s painterly realism, art had other functions: it could be religious, philosophical or moral. In fact, Duchamp coined the term “retinal art” to describe this type of work to which his widely-known readymades had been the antidotes.

Marcel Duchamp secretly worked on his final project Étant donnés for twenty years, from 1946 to 1966 in New York. The work is a prodigious installation and has several layers. The first layer is a wooden door with two peepholes at eye level. Following the door, there is a brick wall, which frames a three-dimensional tableau: a partly visible naked woman’s torso, on a bed of twigs, holding a lantern in front of a realistic landscape with a sparkling waterfall. By peeking through the peepholes, the viewer immediately turns into a voyeur confronted with this ambiguous scene. The work premiered to the public in 1969 at the Philadelphia Museum of Art, where it is permanently installed.

Why would Duchamp, as someone who disdains retinal art, would create an undeniably retinal installation? Even though he has extensive writings about most of his works, Étant donnés has no accompanying notes or explanations to sustain it. The only written aspect to his work (aside from its title) is the comprehensive loose-leaf notebook that has the factual information to reassemble the piece—in other words: a manual of instructions.

Serkan Özkaya has a theory about this mysterious piece: he claims that it is not just a peepshow to look at, but a projection apparatus. Özkaya arrives to the projection by using the installation as a camera obscura. Camera obscura—literally a “dark room”— is an optical phenomenon. It is a dark room with a small hole that mirrors a projection of the outer scene onto the room’s inner wall. Özkaya dedicated almost four years to implement his theory. As a conceptual artist whose work mostly questions the nature of artistic reproduction and who is not afraid to reproduce art historical works, it is not a surprise that he rolled up his sleeves for building a full-scale copy of Étant donnés: he meticulously created the replica, turned the lights off, and waited.

He took a long exposure picture of the superimposed projection from the peepholes and captured a ghostly image of Rrose Selavy, Marcel Duchamp’s alter ego. Did Özkaya solve the underlying enigma in Duchamp’s final work of art?

Furthermore Serkan Özkaya installed his recreation in Marcel Duchamp’s East 11th Street studio in New York, where it was completed and found after Duchamp’s death.

We Will Wait will feature photographs, videos, a sculpture and a VR simulation of Duchamp’s studio by Özkaya and will introduce the visitors to his discovery. The exhibition will focus on two different ways of looking at Étant donnés. The first approach will be perception: looking through the peepholes to the diorama and the second approach will be projection: looking at the image projected from the peepholes. These two approaches will be differentiated by the viewer by a secret tool provided at the gallery.

*The title of the exhibition We Will Wait (“En attendons”) is an anagram of “Étant donnés”. 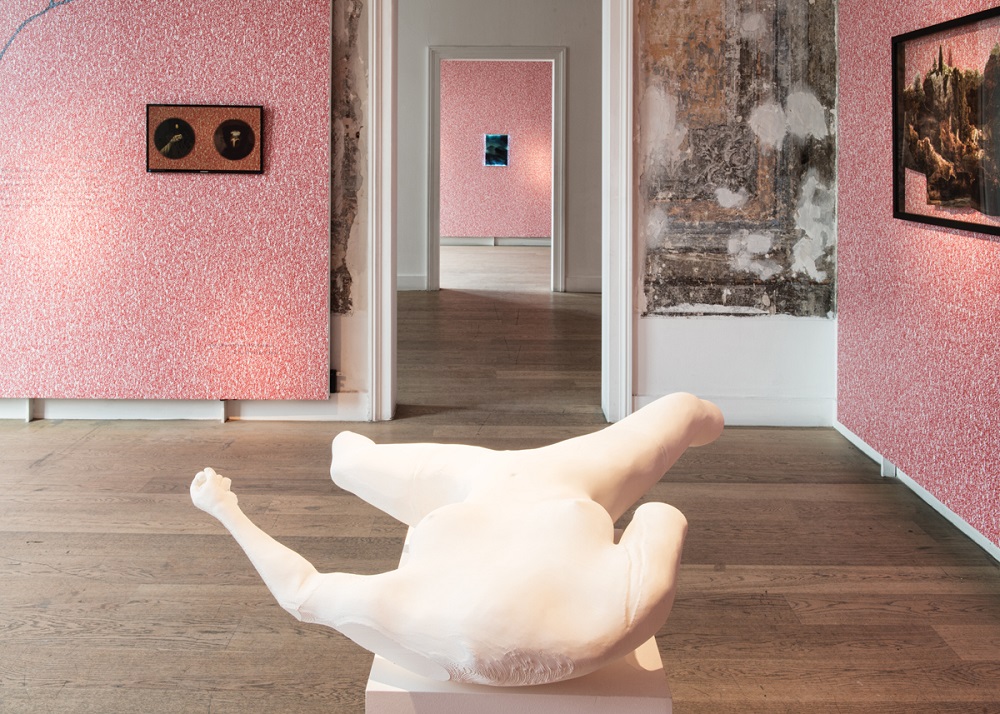