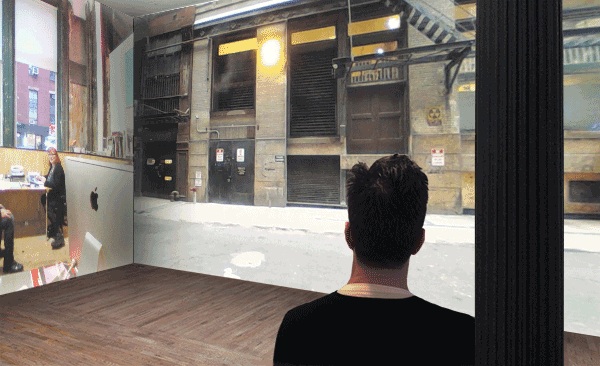 Serkan Özkaya’s solo exhibition titled “An Attempt at Exhausting a Place in New York” is hosted by Postmaster Gallery between May 14 and June 18, 2016. Ozkaya installed four cameras outside of the four gallery walls and projected the feeds on the walls, respectively. Which means, you can see through the wall! When standing within “An Attempt at Exhausting a Place in New York” you look at projections of live feeds of what is happening right outside, separated by a thin -sometimes thick- wall. As the great George Perec had written in his “Attempt at Exhausting a Place in Paris” in 1974: “This is what happens when nothing happens; otherwise, time, people, cars and clouds.” In the current political climate where isolationism and building of walls drives the national debate the artist presents a metaphor for taking down the barriers and the walls demystifying the phenomenon of the classic white box. Acclaimed South African novelist Margie Orford will spend 3 full days in the gallery and take notes of the events outside via the wall projections. These notes can be accessed online on Postmasters Gallery’s website.