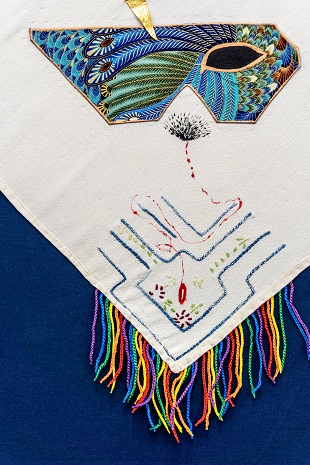 Galerist is pleased to announce Nilbar Güreş’s solo exhibition 'Erzähl mir (Tell me)' at Kunstverein Reutlingen, curated by Imke Kannegiesser held on 17 November 2019 - 2 February 2020.The solo exhibition 'Erzähl mir (Tell me)' by Nilbar Güreş deals with the effects of hegemonic structures and conflicts on human coexistence and the environment. Central themes of the exhibition are identity, internal and external migration, as well as the organization of minorities in relation to ruling power mechanisms. The focus is on people and their relationships to each other in private and public space.The artistic praxis of Nilbar Güreş is based on a performative approach and a precise observation of the cultural environment. Güreş often collaborates with women and specific social groups, including them as leading figures in her projects. On display are various media such as photography, collage, drawing, sculpture and film from recent years and from different projects. In addition, new productions will be on view that are specially created for Kunstverein Reutlingen.Key work of the exhibition is the 3-channel video projection Open Phone Booth (2010-2011), which is displayed for the first time in Germany. Güreş follows family roots and portrays the Kurdish-Alevi inhabitants, a self-conscious, modern and open-minded minority in Turkey. Living in a village in Eastern Turkey, they are cut off from the major metropolises of Turkey in infrastructure, social and political terms. Open Phone Booth is a sensitive poem about how survival is part of human condition determined by the state-controlled everyday reality and the direction of global change. The large-format textile work life-proof curtain (2019), a curtain especially created for the exhibition and made of specific fabrics and traditional patterns, combines concepts of home and identity. It marks the separation between the inside and the outside. The opaque curtain once more symbolizes the isolation of the Kurdish-Alevi minority. Generally, it intends to provoke a dialogue between cultures by consistently referring to the impressive window front of the institution's architecture and being visible from afar. For Güreş, textiles and fabrics are a productive source and means of expression of subversive criticism. The new collage Location / Konum (2019) addresses the complexity of the literally interwoven interactions between technological progress, environmental challenges, and ethics towards living beings.Nilbar Güreş uses a highly nuanced, sometimes provocative set of signs and symbols, expressed with precise aesthetic enactments of material. At the same time, she relies upon a characteristic humor to offer possibilities of immediate accessibility.The exhibition is supported by SAHA Foundation and Institut für Auslandsbeziehungen.