For the past fifteen years, Aksan has been exploring the clashes between the real and the virtual world, and the paralyzing effect it has on society. His oeuvre is focused on contemporary aesthetic contemplation of the body and its fictitious perception.

The exhibition places focus on our constant exposure to drastically evolving and conflicting visual imagery, which is further enhanced by Aksan’s masterful technique of hyperrealist pencil and acrylic airbrush. Aksan’s practice involves in-depth research; the artist collects images from the internet in an almost scientific manner and constructs surreal, timeless settings that help to question and examine the discrepancies between predetermined ethical codes and the current voyeuristic culture that permeats society. The juxtaposed imagery is equally inspired by the Renaissance and contemporary visual consumption. Renaissance, meaning rebirth, refers to the time period following the Middle Ages when the arts began to regain its nobility and value. For Aksan, the grace and beauty of these 15th and 16th century paintings symbolize an innocence that is present yet hidden. The religious symbolism in his works; the figures of Adam and Eve, angelic creatures floating over the earth, and swirls of fine cloth emphasize an ethereal atmosphere - and he inserts contrasting eroticised female bodies, neon signs or cartoon patterned wallpaper to accentuate the contradictions between our daily life and current visual culture. From Michelangelo’s ‘The Creation of Adam’ and Hubert and Jan van Eyck’s famous Ghent Altarpiece, ‘Adoration of the Mystic Lamb’, the artist carefully selects specific parts or figures, bringing them together in his illustrations of imagined spaces. This way, while painting a wall fresco, Aksan also reinterprets through rearranging their perspective, colour and depth into a new form.

Rabbits as symbols for lust, dogs for fidelity, cat for watchfulness, pigs for self-indulgence and snakes for the presence of evil; Aksan uses depictions of stuffed and live animals not only as symbolic art historical references but also indications of innocence behind the ambiguity of religion and morality. In these works he creates stages that surpass time; afflicted with historically religious and cultural symbols, adding contemporary imagery. The larger work that this serie is based upon has a formal affinity to an altarpiece, composed of multiple panels. Combining over a hundred found images in a highly colourful composition, Aksan uses the allegory of angels, lovers and effigies of women creating a unique romanticized form of beauty that he simultaenously examines and challenges.

The duality resting at the core of ‘Neo’ offers the viewer a peek into Aksan’s conflictual realm. 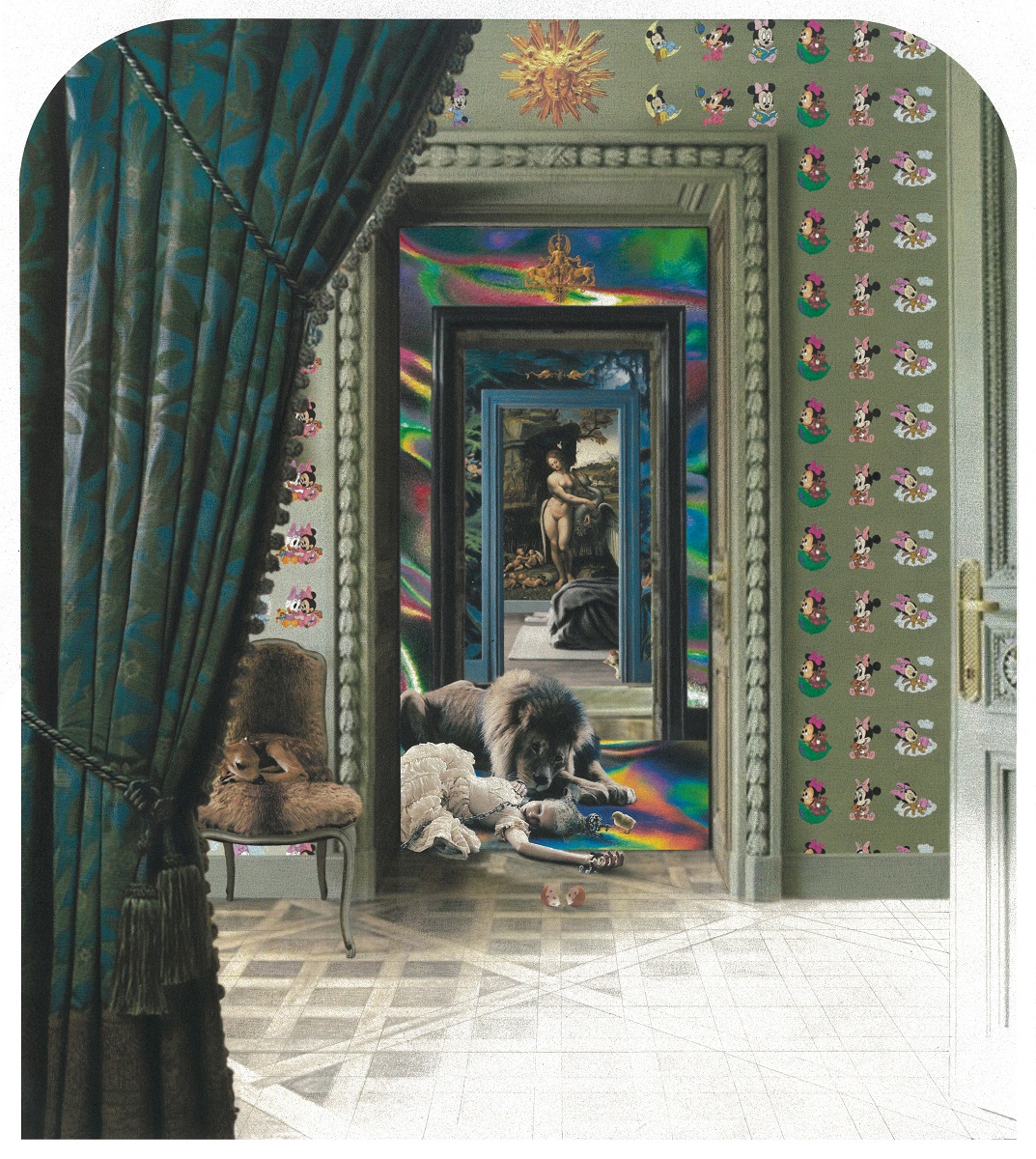