"Patterns that permeate the paintings, walls, floors and objects, and in essence, dominate the entire exhibition, motifs that are related to tradition but are presented in a contemporized manner bring to mind not a fixed definition of modernity, but a perception of modernization in a state of perpetual becoming. The primary element that renders this process more visible is women."

Elif Uras’s latest paintings and sculptures reflect on female agency as observed in contemporary society through reproductive, domestic and wage labor. The female protagonists Uras depicts in her work are within interior or exterior spaces that appear increasingly confined and homosocial, and yet, instead of offering a simplistic view of female objectification, they reveal the complex and nuanced agency of women in today’s global economy as producers and consumers. The line between the private and the public is constantly being redrawn and renegotiated through a multilayered female-driven dialogue between tradition and modernist principles of liberalism and secularism. The exhibition takes its title from a Turkish idiom that describes a state of indeterminacy between dreams and reality, memory and vision, apparitions and actual perception.

The exhibition marks a new chapter in Uras’s singular vision of the complex, ever-changing relationship between Western modernity and traditional features of Eastern art and culture. Oscillating between figuration and abstraction, her works suggest a formal, aesthetic and contextual relationship between painting and ceramics. Motifs derived from historic sources converge with feminized patterns in pulsating colors inspired by contemporary headscarf designs. Her ceramic sculptures combine the delicate, highly detailed brushwork of traditional tile work with graffiti-like, expressionist patterns of spray paint resulting in a personalized visual language. The exhibition, as well as the entire spatial installation, reflects the female body and its powers of creation, and is punctuated with traditional architectural and decorative elements such as a site-specific niche lined with voluptuous vessels. Spiraling inwards from the entrance of the gallery, following a succession of rooms containing paintings, ceramic vases, plates and sculptures, the audience arrives at a final chamber where a belly-shaped ceramic fountain meets a large-scale tile installation. 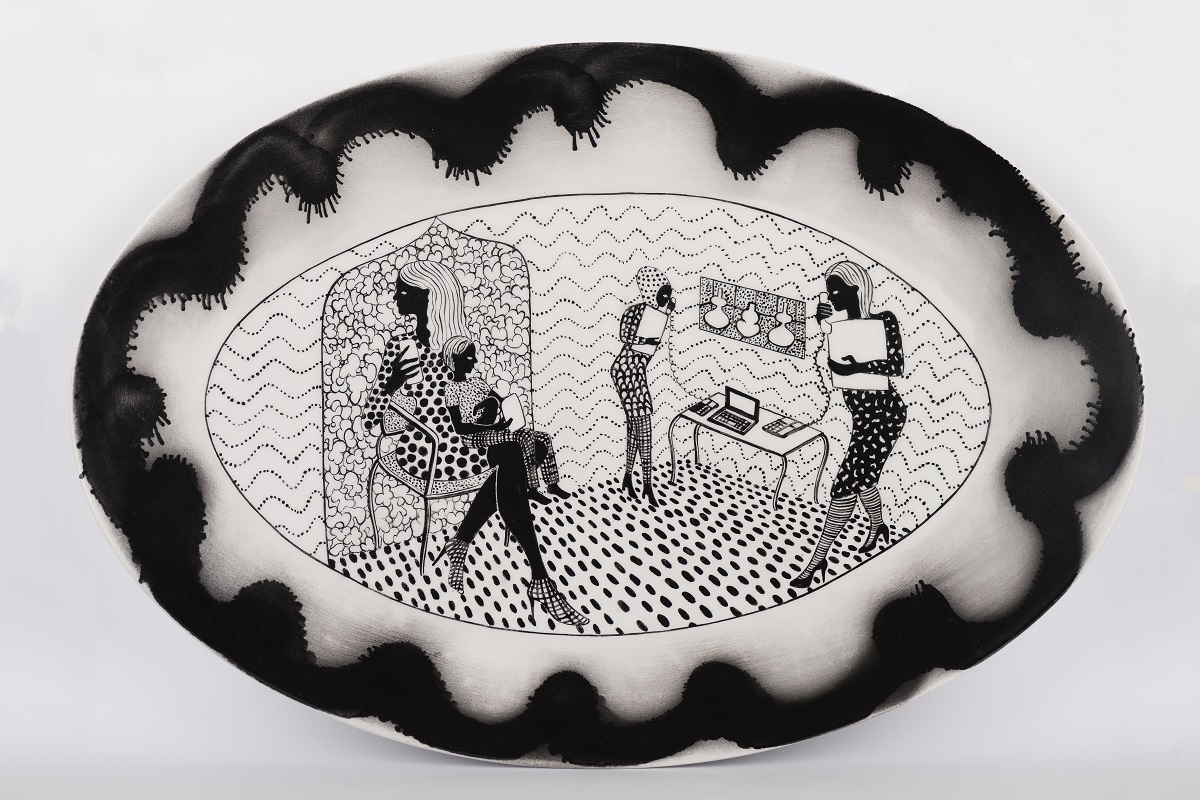