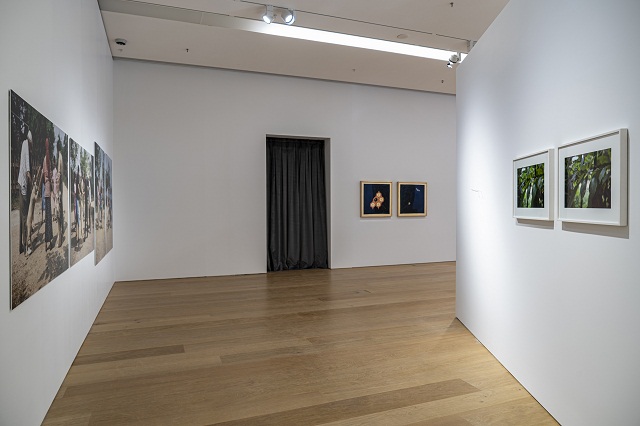 Nilbar Güreş is on display in 'On Celestial Bodies', Arter, with her homonymous three-channel video and mixed technique on cloth, Open Phone Booth, 2011.

Drawn from the Arter Collection, the group exhibition titled 'On Celestial Bodies' deals with questions around the possibility of reconceiving and reconstructing a vital terrain for living together in our present day. Including works by twenty-eight artists, the exhibition invites visitors to contemplate together the ways that beings come together and disperse, the manners through which they build relations, and their ways of distancing and converging with each other.

The title of the exhibition aims to point to the potentials and limits of the conception of the material embeddedness of beings. This notion of material embeddedness, as highlighted in the famous quote from the 1980s by astronomer and astrobiologist Carl Sagan, “We’re made of star stuff”, also informs one of the fundamental questions addressed in the exhibition: What would it mean to think of an artwork, a pencil, a human, a virus, a robot, a cat, a tree, a creek, a mountain as a celestial body as much as the Earth and Venus are? Dealing with the act of destabilising the foundations of anthropocentric hierarchies and exceptionalism, built, as they are, on binary oppositions, this question aims to debunk the validity of various dualities and distinctions, including those that place the human above the non-human.

With their proposals for, and criticism of, the complex and multiple ways of being together, 'On Celestial Bodies' questions the possible effects that exhibitions and artworks may assume in imagining a politics of life. What are the potential ways of understanding art today as an act that cares for radical relationality, and one that affirms and defends life itself, in the context of the idea of justice, that makes living together possible?